I’ve just had a nice relaxing week on the Isle of Wight. Some of the produce produced there is up with the best in the country.

Bacon from the IOW Bacon company is a bit of dry cured piggy delight. And they do a cut not seen very often these days, collar. It’s a bit like a cross between streaky and back. Shaped like a back rasher but with the fat levels of streaky. Crisp fried it has a gorgeous swiney flavour (unfortunately, not available with rind. I did ask)

We had it a couple of mornings with a nice fried duck egg. The egg creamier and richer than a hen’s egg and the bacon on some sourdough was lovely. 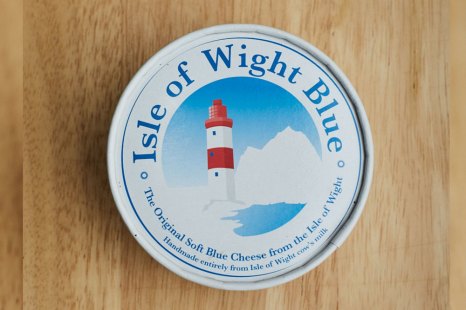 We ate all the blue we bought while we were there but I did manage to bring home a sample of their Gallybagger (IOWight ish for a scarecrow). It’s a cheddar type cheese with a lovely salty flavour that goes fantastically with crusty bread and some home made pickle. 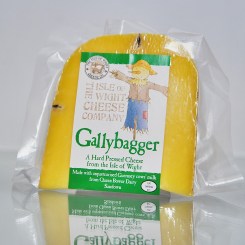 But, what of the crabs in the title?

Well, we called in a traditional beach side cafe in Sandown while we were there, the unsurprisingly named Beach Cafe. It’s a place we’ve been to many times because the food is good and the people friendly and committed. One of the specials they had on the menu on our visit was a Bembridge Ledge crab burger and it was cracking. A lovely loosely pressed crab burger made with a good ratio of white to dark meat. It must have been a nightmare to turn in the pan it was so loosely pressed. Topped with some garlic prawns, a good salad and some chips it was everything a good seaside meal should be.

Next day we went to a little tea room near Ventnor where they serve, in my humble opinion, the best crab sandwiches on the Island, made with Ventnor Bay crab this time. The crab, however, tasted totally different from the day before. More meaty in texture and a bit less sweet but still excellent.

The point? They’re the same species, brown crabs that live all around our shoreline, caught about 10 miles apart but tasting totally different. Not to mention the Cromer crab, different taste again, very sweet, but the same species. Why the difference?

I think it can only be that illusive quality the French call “terroir”. The set of factors that affect a crop’s taste. But what differs? All crabs are brown crabs. All live under the same sea that surrounds our whole coast so no difference there. All eat the same rotting flesh that falls to the seafloor where ever they live, again no difference. To my mind it can only be one thing…. the seafloor they live on. All three types mentioned above live on hard rock ledges not sand or mud. Would that affect the taste? It seems to, they all give some of the best crab meat to be found in the UK.

I think it’s also got something to do with the fact that they’re hand picked, that is the meat is separated from the shell by hand, not a fast task unless you’re highly skilled (I’ve seen pickers in Cromer do a whole crab in minutes. It takes me at least half a very pleasureable hour). Much of the supermarket crab is blasted from the shell by compressed air, totally changing the texture, then pasteurised to keep it for longer. Urgh!

So, now we’ve got our crab what to do with it?

Apart from sandwiches or salad, crab goes wonderfully with linguine and it’s so simple to cook. Cook your linguine al dente in plenty of heavily salted water, better still sea water, then simply stir through flaked, white crab meat, a little salt, pepper, and dried, Italian chilli flakes to taste. Add some grated lemon zest and a squeeze of same lemon and demolish (no Parmesan though PLEASE).

My second favourite is a dish I served on Masterchef in 2007 as a starter and it’s a take on a creme brulee…a crab brulee. If you fancy having a go here’s my recipe, adapted from one kindly given to me by the former chef at the St Helen’s Restaurant in, of all places, Bembridge. So you can guess which ingredient inspired the dish!

For the grapefruit and pea shoot salad

Beat the cream & eggs in a large bowl, add the mace, salt and pepper and mix. Add in the crab meat (check it to make sure there’s no shell lurking) and stir well. Cover with cling film & refrigerate for at least an hour to let the crab infuse.  Ideally, you should let this sit in the fridge over night.

Bake for 45-60 minutes but check the ramekins after 40 minutes.  When it’s cooked, the crab brulee should be set but have the hint of a wobble. Remove the ramekins from the bain marie & allow to cool to just above room temperature.

When you’re ready to serve, sprinkle a thin layer of Parmesan over the top & brown under the grill or these days, I suppose, with a blow torch. Serve with the salad and some good, fresh bread and butter.

View all posts by Craig

2 thoughts on “I’ve got Crabs……On the Brain”