How and with whom, I hopefully hear you cry? Well read on and I fervently hope you won’t be disappointed.

I’ve not been writing this blog very long and I’m still very much learning and grateful of any bit of journalistic advice that I can beg, steal, borrow or, even better, be offered. You can imagine my delight and surprise then, to be invited to partake of a bite and a pint with a man who, if you’re from around Sheffield and have had any true interest in the local food and drink scene over the last 20 years or so, is quite literally, a legend in his own lunchtime. The former Sheffield Star food writer and restaurant critic, Martin Dawes (Oh, and he did The Diary feature for many years too).

I have to say right now that I’ve known Martin for quite a few years now. It all started back in the mists of time when traditional, free range and passion were the buzzwords. He wrote,as always, knowledgeably, passionately and with humour about the food and drink scene in the area but one day wrote a line about the age when lamb becomes hoggett. In my sallow youth I emailed him (yes, it wasn’t THAT long ago for God’s sake!) to protest that hoggett is usually a beast over a year old and it has permanent inscisors. I was a food anorak back then. He replied with his usual wit and bonhomie and we emailed occasionally from that day.

Things ramped up a bit when my wife and I went into the pub trade and Martin arrived out of the blue to review us when we were at The Peaks Inn – Castleton. He was kind enough to give my featherblade of beef and rhubarb crumble (not on the same plate) a glowing review, and our food in general high marks. He reviewed us again at The Castle Inn – Bradway as his penultimate ever review for The Star before retirement and I was honoured.

We met last week, for the first time in three years at one of his favourite haunts The Beer Engine on Cemetery Road to sample some of John Parsons, the head chef’s, tapas plates of food which Martin Reviewed a few weeks ago.

A pint of good Neepsend Blonde on the table, we got to the menu: 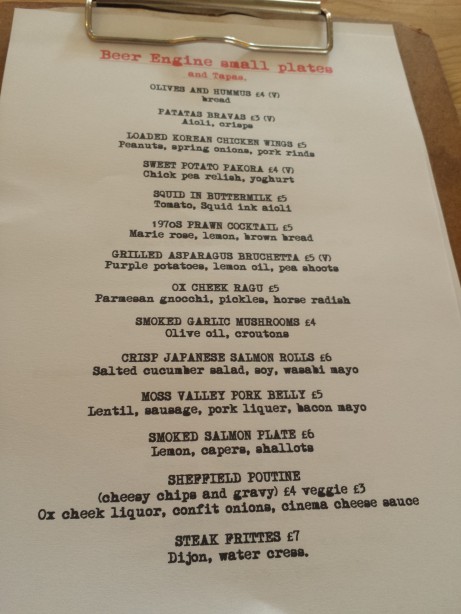 We were crestfallen to see none of the sweetbreads Martin had been promised on his previous visit but, as John explained, there were only frozen available and that was a complete no no so far as he was concerned (you begin to see why this guy is so highly rated?).

Now anyone who knows me (and Martin for that matter) knows that to bet against me choosing belly pork from a menu is as foolhardy as betting against President Trump being sectioned sometime in the next 4 years, so one dish chosen at least. To go with it we went for the squid.

Said plates duly arrived and My God what flavour!

The squid was everything it said. Fresh as a daisy, soaked in buttermilk and then dredged and crumbed and quickly fried to crisp, they came with a gorgeous squid ink mayo and a fresh, light tomato salsa type sauce with a hint of smoked paprika to give it a Mediterranean or Mexican? twist. So that’s Spain/Mexico sorted. Next onto……….

I suppose the UK or maybe Germany? The belly pork was as good as my own, which I love. I braise/roast mine for at least eight hours and I suspect this was in the same timescale. The fat under the skin had melted away to leave a thin, glass like shard of crackling that shattered like glass as we cut through it. The flavour simple and the sausage incredibly meaty in texture and with a distinct taste of hot dog but in a sensational taste way that went with the pork admirably. I must admit the bacon mayo got a bit lost as we fought to grab bits from the dish (we were sharing you see). It later transpired Martin didn’t get any sausage so I couldn’t ask his opinion on the hot dog taste…and I felt guilty.

We couldn’t stop there on our culinary whirlwind as John arrived with some of his Korean crispy chicken wings to try…Phew!

An absolute stunner of a dish. The wings were hot, sweet, sour and salty with a real kick but all the flavours in total balance. The pork rind was of the porky puff texture rather than the scratching texture which is achieved by dehydrating them I believe. I felt they would have benefited from a touch of salt but I understand why there was none as you wouldn’t want to ruin the balance of flavours that already existed and they were there for texture more than anything else.

Wow, South East Asia now gave way to a jaunt to the sub continent as we sampled sweet potato pakora.

I’m not the biggest fan of sweet potato but managed(he says jokingly!) to devour my share. But the real star of this dish, I felt, was the chickpea relish. Again, by fantastic blending of spices, John had managed to lift the humble chickpea to new levels.

Last but by no means least, our last stop was I suppose I should say, North Italy but which in reality was literally out of this world as we were transported to a place that I hope not to take up residence in for a good few years…namely, HEAVEN, as we were treated to an Ox (or Beast’s as us old ‘uns like to call it) Cheek Ragu that was quite simply as good a plate of food as I’ve eaten in years. 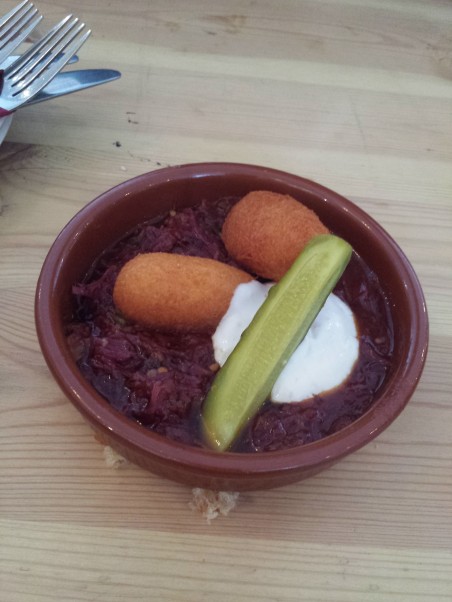 If you look on the menu you’ll see a 1970’s prawn cocktail on there. Well, I reckon John must have started the Ragu around the same time such was the depth of flavour. We did quiz him later and he said it took about a week to make from brining in saltpetre to cooking over several days. Shredding and the addition of tomatos etc. and the final flourish of some fine, really subtle Parmesan gnocchi, deep fried to add the texture again and a pickled cornichon to help cut through the richness of that incredible stew.

On talking to John he said you wouldn’t want a bowlful of it as it was so rich. I agreed and disagreed at the same time as I thought that probably a bucketful might not satisfy me.

Tom the owner, told me there are plans to start a supper club on Sunday nights. My advice, book and fill your boots!

So there you have it. A world trip in 80 minutes, and what of my companion Mr Dawes?

Perhaps some of the modern intake of Sheffield foodies might not know of his writings so much. I hope they do know because they were, and still are, I might add, some of the best food writings I’ve come across. You can read some here. Here’s a man who for a long period was the leading light in food journalism in Sheffield. He carried the flag when food blogs were unheard of, and one of the highlights of my week was always Wednesday evening’s Star. Not just for the review but for the stories he told within it. In fact the best bit of advice he gave me on Friday was ” There’s nothing more boring than ‘Dog bites man, man eats food’ “.

We talked about food, drink and the fashions and fads surrounding them all through the meal and remember, he’s seen it all come and go and come again as it always does. His depth of knowledge and feeling about all things culinary came shining through.

We talked about my upcoming trip to Italy and his trip to North Yorkshire where he hoped the Magpie Cafe in Whitby would have reopened after its recent fire as it’s the only place there he’s ever had fish and chips. Surely that speaks volumes for his values.

I left feeling fulfilled and happy. Fulfilled by talking with a man whose food values are like my own, uncomplicated and uncompromising and happy that a) he’s still writing in his excellent blog Another Helping and b) because we’re doing it again soon to discuss the fallout from my upcoming food trip to Italy and his to North Yorkshire.

A legend indeed and I hope the Magpie IS open in time for you Martin.

View all posts by Craig